skip to main | skip to sidebar

In my last post I mentioned a couple of eating houses and said I would post more! As those of you who know me well would agree, I do like the 'odd pint or three' and are not one for 'small portions' I am not that keen on beer that has the bubbles inside it instead of on the top ( like certain soft southerner friends of mine) as a Black Country lad I was raised on Bank's mild and always enjoyed a head on my beer and served my apprenticeship on that brew until about 15 years ago when I took a liking to 'the black stuff'.
It's Guinness' porter that has me this way,
For it's sweeter than buttermilk and stronger than tay'
And when in the morning I feel kinda rough,
Me curse on Lord Iveagh who brews the damn stuff!
Any way one of the things I enjoy when out boating is stopping at different pubs along the cut and eating out and after having a rather poor meal and even worse beer one night last week end I thought I would make a blog entry each time we have either a good/bad meal/drink (as do quite a few) so here's the first.
XXXXXXXXXXXXXXXXXXXXXXXXXXXXXXXX 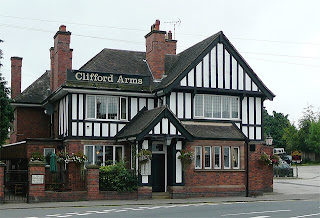 and canal. Off the canal at Trent Lane Bridge 73 walk about 100 yards to pub.

A weekend Frolic with frost and food.

Well a good three days boating was had last weekend taking Minnow up to Norbury Junction for the ‘end of season bash’ next week end. It all started on Friday after work when I went to pick up my new car. An hour old with about twenty miles on the clock and I was parking it an the grass verge opposite ‘The Junction’ car park to leave it there for three days for the birds to sh*t on and tractors to scrape down the side (tractors didn’t but by god there’s some big birds round there!)

Originally Dawn was going to work Saturday morning while I fetched Minnow up to the house from the moorings but Dawn decided to let the girls look after the shop so I thought oh good we’ll get an early start! Well first we went shopping then Dawn had a shower then we packed all the food and clothes into plastic boxes and we finally drove down to the moorings about 12.00pm and after loading up Minnow we set off about 12.30.pm. Had a good trip up to Great Haywood and managed to get moored right up by the Junction. After washing the boats down we had a wash and change and headed off into the village for a meal and a drink or two at the Clifford

Arms (more in the next blog) Sunday we were off by 8.30am and were greeted by a heavy frost with all the ropes stiff and everything stuck to the cabin top. Another great day and by about four in the afternoon we were moored up at Cross Green for a meal and a drink or three in the Fox and Anchor (more in the next blog) Monday and another 8.30 start and again greeted by a beautiful heavy frost which as the morning started to warm presented some beautiful scenes of mist off the cut and trees festooned with whitened spiders webs. 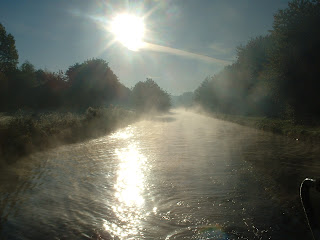 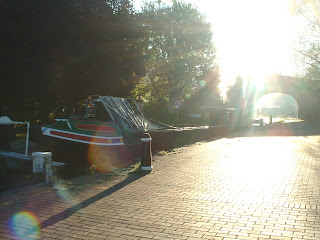 and then onto a canal I love/ I hate / I love / I hate. I love its depth and width, it’s straightness, its embankments and it’s rocking’s but at the same time I hate the miles and miles of moored boats, so do Bolinders as they like to be working not idling! 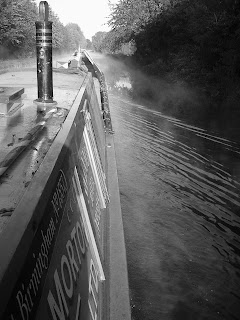 By about four we arrived at Norbury. I dropped Minnow into a gap just before the start of the BW moorings and dropped Dawn off to go and see what room was available nearer the junction. Dave Ray, the manager at had heard Minnows Bolinder coming along through Shelmore woods and was waiting for us and met Dawn at the junction and said to bring Minnow down and moor in front of The Junction Pub ahead of Kangaroo and . 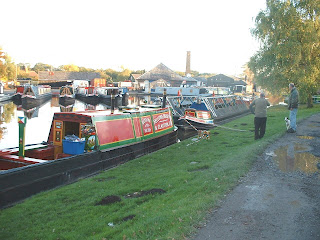 By 6.30pm we were all packed up and car loaded and we headed back, stopping at the chippy in Gnosall (more in the next blog) and sat in the rear car park eating fish and chips, big bottle of full fat Coke and all with Bolinder hands! Can’t beat it. Talking to Dave and Sue Cawson outside the Junction pub (from which Dave’s barred) it looks like it’s going to be a good weekend with quite a few working boats expected, but will report back after the event, but until then as always

Posted by Blossom at 9:37 pm No comments:

It's amazing how quickly news travels round the system and talk about Chinese whispers! First of all many thanks for all those friends who have contacted me to hope I am over my ordeal and that my leg is mending - to put the record straight, I have not or did not break my leg/knee when the Bolinder kicked back as was asked of me from a couple of sources, it was just badly bruised as I stated in my blog after a few hours rest I kicked her over and we got back home. We had a little sally out with Minnow last week end, only up to the boat turn at Handsacre and back and enjoyed a couple of hours Bolinder boating in glorious sun shine and good company. One of the things to come from this trip however was an E mail to a British Waterways manager (10th Oct) regarding the illegal infilling of this winding hole. I have copied the e mail here for your perusal, its contents are quite self explanatory:-
Dear Mr Davies,
please forgive me if you are not the right person to whom I should be sending this E mail, but if not I hope you will be able to forward it's contents to the right department.
I am the owner of a historic narrow boat and have been involved in the canals for almost half a century and it really makes me angry when people try and do just what they want to irrespective of the effects on others. At 70 foot in length it is very limited as to the places/winding holes where it is possible to comfortably turn such a craft round. On the Trent and Mersey canal, Just below Handsacre Crown Bridge No 58 there exists one such winding hole and on passing it a couple of weeks ago, I noticed that the private property whose rear garden surrounds the winding hole, were building a wooden garden shed/summerhouse right on the point of the winding hole at garden
height about four foot above canal level, also that in front of it they have built a wooden decking platform that actually extended right over the point of the winding hole the supporting legs for the decking being driven into the edge of the canal making turning of a seventy foot boat very dangerous and at risk of the bows hitting the legs of the decking causing it to collapse and in danger of injury to both the boat turning and anybody on or in the said building. That was bad enough, but today (Sunday 10 th Oct) we went up to this winding hole with our boat and they are now in the process of infilling the corner of the winding hole, as can be seen in the attached photo's, using a small 'JCB' type digger with loose rubble/dirt. The effect of this is that now with a 70 foot boat you have to position your bows 20 foot either side of what was the centre of the
winding hole and this makes the process of turning very difficult. As well as the health and safety considerations, and the inconvenience to boat users, I always understood that local canal by
laws stated 'the throwing of refuse, dead or alive, into the navigation is strictly forbidden and offenders will be prosecuted.' as well as the fact that I understood that British Waterways actually owned about a yard of the land surrounding any of their canals, including private gardens. If these people are allowed to get away with this, then I feel it will only be a matter of time before all canal sided property owners will start extending their gardens by infilling of the canals at will. As this winding hole is only a short distance from British Waterways depot at Fradley Junction it would be easy to despatch someone quite quickly to stop further infilling taking place I look forward to you response/reply.
Yours sincerely
Mr M J Edge
I received an E mail back the next day stating :-
Hi Mr Edge,
Thank you for highlighting this problem. Unfortunately the Trent and Mersey Canal no longer lies within West Midlands waterway. Following a restructure last year the Trent & Mersey at Handsacre comes under the jurisdiction of Central Shires waterway, under the management of my colleague Darren Green. I have therefore passed your email on to Darren, and I am sure he will be in touch in due course.
Regards - Dean
As to date I have not heard anything else so I will see. Below are a couple of the photo's I sent, taken on mobile phone so quite poor quality but good enough to see what's been done. 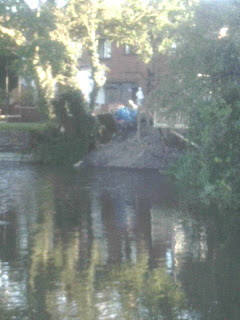 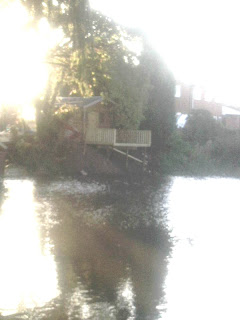 Anyway that my update so until next time, unless your the legs to a summer house then :
I'll bang 'em about
Blossom.
Posted by Blossom at 9:45 pm 5 comments: